The last (or penultimate) secret of the Templars 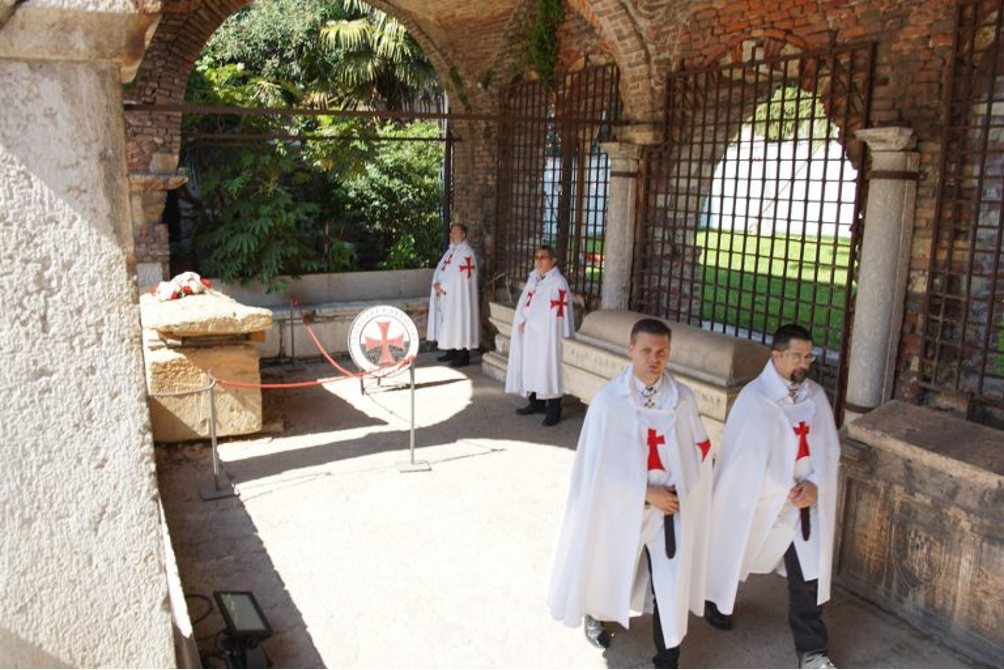 Is there or isn’t Arnau de Torroja, the Grand Master, in the sarcophagus of the church of San Fermo? There is no shortage of clues but the evidence, you know, is another thing. The DNA test compared with that of his brother Guillem, buried in Tarragona, will deliver an answer that awaits everyone for a while; scholars, enthusiasts and even the Spanish newspaper El Pais. Meanwhile, the alleged skeleton of Arnau is not the only one who rests in the perennial silence of that stone.

A decidedly high-ranking family, lives with a comfortable development, wrapped in the atmospheres of the Iberian peninsula at the beginning of the reconquista . Arnau de Torroja’s childhood is written in Salsona, in that piece of Catalonia. He grows up and then leaves to fight the Moors in Spain. He becomes a Templar brother in 1162. A few years later he is already Master of Catalonia and Provence and seems to have the prized talent of diplomacy. A skill that is useful to him when he arrives in a Holy Land that has just filed two crusades against the Turks and tries to savor a minute glimmer of peace.

To reward his skills and, last but not least, his valuable contacts with the papal curia, comes the appointment as Master General of the Temple around 1180. Four years later he comes to Verona to meet Pope Lucius III and Emperor Frederick I: together with the Patriarch and the Master General of the Hospitallers he must take stock of the situation of the Crusader states.

An embassy to Europe that he will not be able to complete because death takes him right in our city. And here the mystery begins, since his tomb has never been found. Until, perhaps, today. To endorse the thesis and, at the same time, to give the comfort of reality to the hopes of the Catholic Templars of Italy, laboratory tests were used (the results of which, as we write, have not yet arrived).

So, Guillem, Arnau’s brother, comes into play. Or rather, his DNA: given that, at least, we are certain of his burial place. Died less than a decade ago, as bishop of Barcelona and later archbishop of Tarragona, he was buried in the cathedral of the Catalan city.

In the meantime, in order not to leave room for suppositions or fictional deductions, on 21 April the Catholic Templars of Italy, together with the Scientific Coordination for Research on Military-Religious Orders and other subjects, organized a real day of study historical-scientific entitled: The sarcophagus found in Verona and the Templars in the auditorium of the parish of San Fermo Maggiore. Everything that is known about the matter so far was made known right there.

Let’s go in order. The tomb was discovered more than 3 years ago by accident. Condemned to the silence of memory for centuries, the sarcophagus was noticed among the junk of a space in San Fermo Maggiore used as a deposit. To strike the careful and trained eye of Mauro Giorgio Ferretti, not by chance Magister Templi of the Catholic Templar Association of Italy, that patent cross engraved on one of the short sides of the abandoned stone case. The cross is typically Templar and has a stylized sword in the lower arm: symbolism traditionally attributed to the General Masters who guided the knights until the early 1300s.

After the discovery, the studies started which saw a team of freelancers at work (they made themselves available on a voluntary basis) and researchers from the universities of Bologna, Nottingham Trent Barcelona, Harvard and Copenhagen led by the archaeologist Giampiero Bagni and coordinated in particular by the anthropologist professor emeritus of the University of Bologna, Monsignor Fiorenzo Facchini.

Inside the tomb the bones of a man, the alleged Arnau, of a woman and of a young man were found. The remains of the latter are later and are placed after the second half of the 14th century (that of the boy even 100 years later). The Templar Order was dissolved in 1312, therefore, it is easy to think that the burial place was later reused, a widespread practice in the Middle Ages.

Radiocarbon dating, as the archaeologist Bagni clarified, instead attributes the skeleton of the presumed Templar to an earlier period than the other two: around 1020 – 1220. We are here as a historical moment, since Torroja died in Verona in 1184.

Another clue that seems to please the theory lies in some elements that suggest the Mediterranean origin of the buried subject, “probably from the Iberian peninsula” according to Facchini.

Among the remains, the long bones have also been preserved which made it possible to go back to the height of the unknown of about 1.70m, with the presence of a deformation in the spine. Finally, not much, but the fabric found next to it also says something, dyed blue and therefore very valuable: at the time, very few could have it.

In this intriguing puzzle, the Spanish newspaper El Pais adds a piece, however uncertain, which calls into question the church of San Vitale (in Verona the Templar church “in charge”). The sarcophagus may have been transported at a later time to San Fermo, after the flooding of the church at the end of the 1700s, (with a probable stop, first, at Santa Maria del Paradisio, one of the most interesting and vast reliquaries in Europe) .

The last word belongs, as in any mysterious modern thriller, to the DNA which with its response will bless the theories or crumple them. What is at stake? It could be the only tomb in the world attributable to a Master General of the Temple, since all the others (between Paris and Jerusalem) have been destroyed by the absolutely performative damnatio memoriae that the church inflicted on the action of the Order when it decided to cancel it. Which, one can imagine, has some relevance.

Because, as Ferretti himself has repeatedly repeated, if millions of tourists come to Verona to fill their eyes with a false balcony, who knows how many would come for a real Templar tomb. But don’t tell Dan Brown.

Or, maybe, instead, yes.

The conference, in short

The conference The sarcophagus found in Verona and the Templars was organized on 21 April in the auditorium of the parish of San Fermo Maggiore by the Catholic Templars of Italy association and by the Scientific Coordination for Research on Religious Orders – Military, together with the Diocesan Museum of Art of San Fermo Maggiore and the Diocese of Verona, in collaboration with LARTI – Free Association of Italian Templar Researchers, the Museum of the Beata Vergine di San Luca and the Society for the Study of the Crusades and the Latin East, represented, the latter, by Prof. Jonathan Phillips of the Royal Holloway of London and by Prof. Nicholas Morton of Nottingham Trent University. The study day was sponsored by the Municipality of Verona and the Veneto Region.