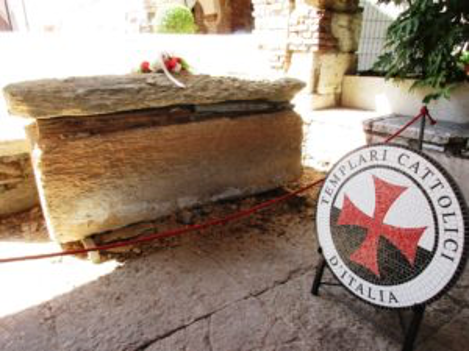 Sometimes some fragments of history emerge from the mists of time and the events known to a few come back to the attention of many. Prudence was a must and doubting formulas multiplied during the historical-scientific conference that presented the results of the investigations carried out on one of the tombs located in the cloister of the church of San Fermo Maggiore in Verona. The clues collected during the multidisciplinary studies – historical, archival, archaeological and anthropological – on the sarcophagus and on the remains contained therein, all seem to converge in the same direction, which presumably refers to Arnau De Torroja, born from an important family of Catalonia, in Spain, General Master of the Temple from 1180-1 to 1184. During the afternoon session of the meeting, it was announced that soon there will be an official confirmation, or denial, that will definitively and irrefutably resolve any doubts. After the analyzes that ascertained genomic similarities with the Catalans, the comparison of DNA with Guglielmo, a brother of Arnau, who rests in the cathedral of Tarragona of which he was Archbishop, after having been Bishop in Barcelona, was authorized. (The other brothers were Berenguer, successor of his father Bernat as lord of Torroja, and Pietro, Bishop of Zaragoza). If the hypotheses so far advanced were supported, that of Verona would seem to be the only tomb currently known to the world of a Templar General Master. Arnau was the ninth of twenty-three Masters and so far no known trace has been found. The Templars in fact, as an extreme act of humility, were buried with poor means, often in the bare earth and with the face turned downwards.
We must take a step back, about three years ago, when Dr. Mauro Giorgio Ferretti, Magister Templi of the Italian Catholic Templars association, noticed the patent cross with a stylized sword in the lower arm, carved on the short sides of a sarcophagus in a state of semi-abandonment in what had become a junk deposit, next to the garbage bins. This symbolism was traditionally attributed to the high dignitaries who led the Knights from 1118 to 1314. There were other writings, now disappeared, it is not known whether they were corroded or chipped away, and a hole probably made for the stripping of any kits or valuables . After a long wait for the authorization granted by the Superintendency, the reconnaissance of the skeletons inside the tomb was carried out, attributable to three different individuals: an elderly man and, placed above in later periods, a young man and a woman.

We focused on the elderly, that is the oldest burial, taking into consideration various aspects, thanks to a large group of specialists coordinated by the anthropologist and professor emeritus of the University of Bologna Monsignor Fiorenzo Facchini, and composed of internationally renowned experts , in relations with the Universities of Bologna, Nottingham Trent and Barcelona. Scholars from the free association of Italian Templars Researchers, from the museum of the Beata Vergine di San Luca and from the Society for the Crusades and the Latin East also collaborated. Furthermore, the interventions of teachers were listened to

and members from the State Archives of Modena, the Instituto Catalán de Genealogia y Heràldica in Barcelona, the Archaeological Museum of Finale Ligure, the Royal Holloway University of London.
Two tiny fragments of cloth were found in the bowl. , certainly pertinent to the first burial, one of which was in an extremely rare and precious fiber at the time, namely silk from a worm. Another luxury is the blue pigment, which in the Middle Ages was obtained with great difficulty from plants. Was it a stole? Or a banner used as a ceremonial cover at the time of burial? Certainly the reference is to a person who held a position of some importance. However, research on plants and pollen was not possible, because the hole in the walls polluted the contents. The dating with the carbon 14 method traces back to a period between 1020 and 1220 the bones belonging to a male individual, about 50 years old, between 1.60 and 1.70 cm tall. According to the paleopathological study, the vertebrae of the spine are calcified and the jaw is affected by a serious infection. So the subject had suffered from back pain and toothache in life. The realistic image of a man emerges, which could match what surviving texts, letters and documents tell. Many of these were unfortunately destroyed in the damnatio memoriae against the Order, dissolved when its members were spuriously accused of heresy.
The Pauperes Commilitones Christi Templique Salomonis were a monastic order of Knights, defenders of the Pope and pilgrims, both in Europe and in Jerusalem and in the Holy Land. Arnau de Torroja was a fighter, who participated in particular in the Reconquista campaigns of Lleida and Tortosa, and a skilled diplomat. From the Holy Land where he had been transferred, he was sent to Italy together with two other ambassadors to seek help in Europe. It is known for sure that he landed in Brindisi and arrived in Verona. This city was then a neutral ground, where Pope Lucius III and the Emperor Frederick Barbarossa decided to meet. Arnau was able to speak with the first but not with the second, because he fell ill and died on 30 September 1184, at the age of 65-70. The others continued their journey to England, unsuccessful, so much so that shortly thereafter Jerusalem fell. A certain source says that De Torroja “was buried in the house of the Veronese temple”. Probably, but there are no certainties, then the Templar church was San Vitale, which was later flooded by the Adige. It is not known how, when or why the Arnau tomb was moved to San Fermo, provided this attribution is confirmed.
The sarcophagus is in precarious conditions due to the imposing flaking of the Veronese stone , very crumbly. First of all, the intention is to consolidate it, recovering the structure and the crosses as well as the burial. We are thinking of keeping the lid slightly apart and placing the remains in a crystal urn to keep them always exposed as a relic. The Municipality is the owner of the newsstand area and the Templars association had it on loan. The newsstand itself will be closed by glass, and has already been cordoned off in recent days. Now it is a question of overcoming the bureaucratic problems and of finding sponsors. In Verona there are many signs of a significant Templar presence, so the association has undertaken the commitment to preside over the place and from here, in a near future, to start itineraries on foot, not for tourists but for religious tourists, that is pilgrims who will be accompanied in the Templar churches of the city, free of charge every Saturday and Sunday, by today’s Knights with ceremonial clothes. Ferretti’s intention is to re-evaluate the Order, debunking the erroneous beliefs matured in the past and to be able to officially return to the function of guardians of the Christian faith.
The wish expressed by Monsignor Roberto Campostrini, vicar general of the Diocese of Verona, is that the rediscovery helps to found elements of Templar history and, for ecclesial life, to renew certain values, such as the meaning of spending oneself for the faith and of dedicating one’s life to what Jesus taught. For the city, a ‘ opportunity to rediscover one’s roots.

Conference “The sarcophagus found in Verona and the Templars”, Verona, auditorium of the parish of San Fermo, Saturday 21 April 2018